Clam Chowder with a Side of Pearl 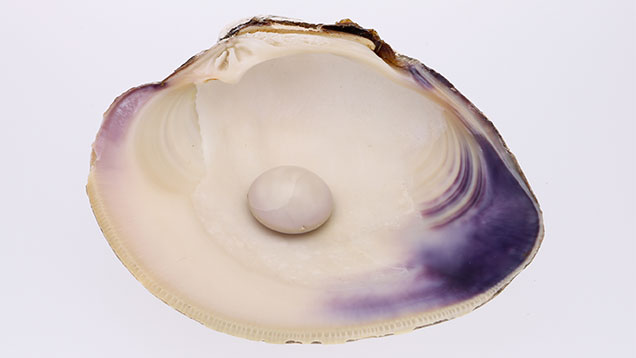 Recently, GIA’s laboratory in New York had the opportunity to examine a fascinating find and hear about an even more fascinating story.

According to Bryan Gosman, co-owner of Gosman’s Fish Market in Montauk, Long Island, one of his staff was shucking clams in the kitchen while preparing to cook New England chowder when he discovered a pearl the size of a gumball.

“It didn’t look real,” said Gosman. “Usually [pearls are] the size of your pinky nail or something like that, but this looked like a plastic knob.”

He then reached out to Rebekah Harris – a co-owner of The Shipwreck Jewelry and Trading Company – to help him confirm the identity of the pearl. She assured him that the pearl was genuine and also the largest one she’d ever seen outside of a museum. She helped him submit the pearl to GIA in New York. 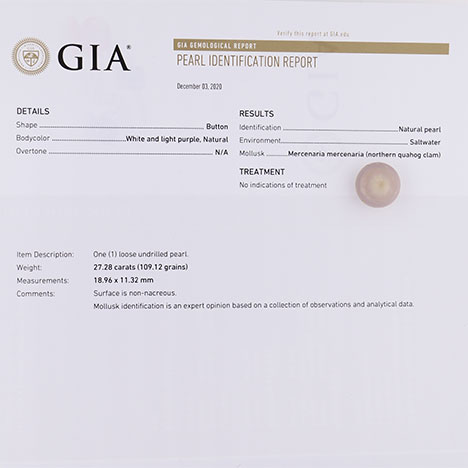 GIA scientists confirmed that the pearl formed in a Mercenaria mercenaria (northern quahog) “clam.” It weighed 27.78 carats and measured 18.96 x 11.32 mm. To put that in perspective, many cultured pearls in jewelry stores range from 8-12 millimeters, meaning that this natural pearl is extraordinarily large. It is also a near perfect button shape, with an attractive white and purple color. Unlike many pearls valued for jewelry, it is non-nacreous, meaning its surface structure is different and has a more porcelaneous appearance.

Quahog ("koh-hawg") clams like the one that produced this pearl are found on the Eastern shore of North America, especially along the coast of the New England states, and can also be found along California’s Pacific coast. The pearls range in color from white and light gray to varied shades of purple, with purer colors being the most sought-after. Finding a quahog pearl is uncommon, not least because cleaning and shucking clams is often done mechanically, so most pearls are lost or destroyed in the process. The rare few pearls that make it into an unsuspecting patron’s food have been cooked, which can damage them. How fortunate that this pearl was discovered early and remained intact!

“What is it really worth? I don't know," Gosman said of the pearl. "It's not about the money – it's just kind of cool."

Gosman reported that he intends to raffle off the pearl to raise money for the Montauk Food Pantry. 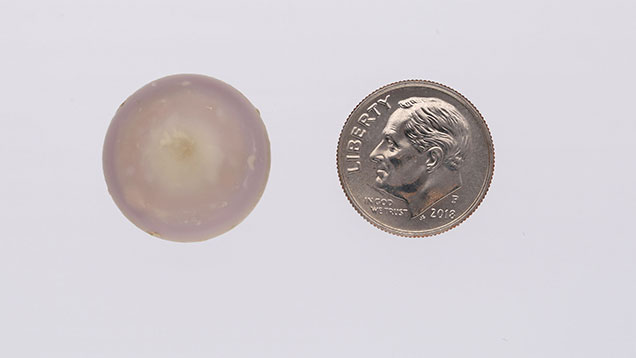 The circumference of this button-shaped pearl is slightly larger than that of a dime. Photo: Sood Oil (Judy) Chia/GIA